About 20 years ago, the legislature opened the possibility of allowing prosecutors to delegate decisions to the police to begin an official police investigation themselves, and then be in regular contact with the prosecutor to inform how the investigation is going and receive instructions from the prosecutor.

In the case of Juicy Fields, one of my clients has filed a police report a week or so after Juicy Fields shut down its internet platform. This client had by then lost just over 30,000 Euro. The police decided to launch an official investigation because of the large amount.

Throughout the fall and into mid-January of this year, the police have tried to investigate, but concluded that they were unable to obtain enough information about the criminals behind Juicy Fields and that the systems and international cooperation the police have could not be used. Therefore, the police decided to close the investigation.

I was in contact with the prosecutor to give me a certificate that he had no intention of bringing an indictment, as I need one to prosecute as a legal representative because I had much better information than the police, and also that I directed responsibility at those who had helped the criminals behind Juicy Fields.

When the prosecutor had taken note of my legal strategy, and all the material and information I had, the chief prosecutor in Stockholm made the unique decision to reopen the closed police investigation with a new instruction for the police to also investigate those who could have helped the criminals, and that the prosecutor himself leads the investigation and does not delegate management responsibility to the police. This means that the companies and people I have identified as accomplices are now the subject of a prosecutor-led police investigation, and as I have unique investigative and information material, the police have now contacted me and are interested in what I have collected and know.

I will not cooperate with the police as a lot of the material and information I have is confidential between me and my clients, but I can give the police tips on what to look for and who they should investigate, and of course point out those I have identified as accomplices – including Meta Platforms Inc. and Mark Zuckerberg who is now the subject of the police’s official investigation. 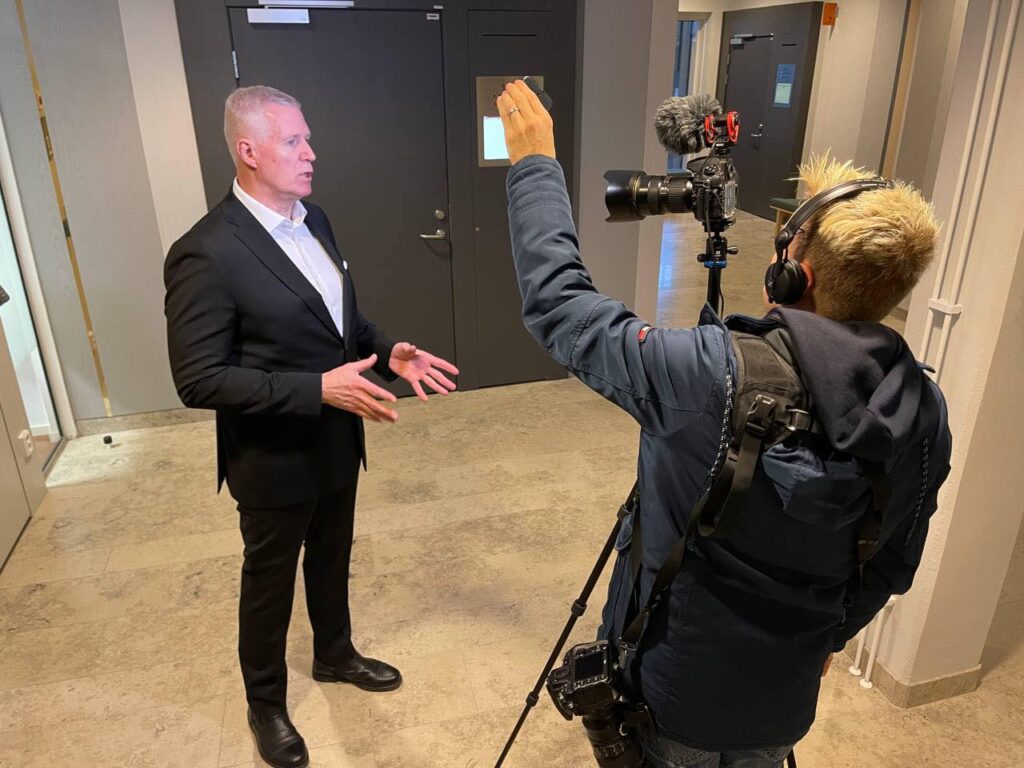 Hold onto your hats because in the next weeks we will begin paving a new legal path that will have global implications for any fraudster using social media. We all atleast whom use facebook have seen the scam pandemic. Facebooks ad trust have gone from 76% 2014 to 14% 2023 although their ad sales have dubbled the recent two years. They earn good money having their platform open to anyone to use like this. If they would take responsabiltiy it would mean much less buisness for sure.

In this video Lars is in Helsinki recording with German ZDF, our whistleblower from the inside of the largest criminal organization on Earth, most likely.

We got to follow very intimately what happend during the Juicyfields exit. It started to dawn on investors that it was a scam and still to this day there is people who hold onto hope – this is true suffering.

I would describe hope as one of those mechanical carusels in the amusementparks. It feels like movement but your not really going anywhere. If you are in investor of Juicyfields, take action. This is how you turn it around.

Now we are starting to get into the good “juicy” stuff with a few tastes from our and dw’s investigations.

This story of Juicyfields began with a large investment fraud and a moneylaundry service for the cartels. However almost on a daily basis since July 2022 the story has expanded and new rabbit holes appear everywhere to this day. Global implications. This organized crime fraud gave us the chance to go after even bigger fish.

We dive deeper with German DW in the coming episodes, stay tuned!

This is fun to see the amount of exposure our story gets. The world have not just one scandal to realize but a legion of them.

German DW not only released one episode but two today! In case anyone missed this, aswell as an written article.

The second episode started to move into the interesting stuff but i can tell you all that the best is yet to come!

Here is their written article
https://amp.dw.com/en/cannabis-cowboys-dw-investigative-true-crime-podcast-drops/a-64442585?

As the reporters said in this episode – This fraud does have many rabbit holes to investigate and dive deep into. Since july 2022 to this day 19th of January the case has almost on a daily basis expanded. We have now establised a tip of the iceberg after a few months of work. Here we will follow in the reporters journey into the world of the Juicyfields fraud in their first episode of the series that air every thursday from today.

We got to to hear how it was presented to the public and how the concept of Juicyfields was never really real. As the Cannabis industry does not work like they said.

Big thanks to the investigating reporters for the first episode. Cant wait for the next

Everyone who invested in Juicyfields with SEPA/Crypto can join our legal actions.

As we closed down our members club to begin our first legal actions in september the long wait for many of you are now over. We are very happy that you want to stand with us in our fight for justice.

Joining batch 2 means you are in for all future legal actions we have prepared – no more fees.


After you have filled in and completed the form(you will find link below) You get a confirmation email from us with the link to the private telegram group for only batch 2 members – there you will have the most updates and information flow as we will be present daily, taking the case forward. Many times clients help us out in things from liking linkedin and other social media posts to research. This is the true power in our community.


Please be mindful that the rest of the website is under construction and needs some work. Our vision is to have a long list of everyone who helped Juicyfields do their scam, online for the world to see, soon.

Many investors are being held hostage with their own money and forced to dance to the scammers music and do everything they say in desperation. Why and How can this still be allowed to go on? Why is this not shut down?

Here you will be able to hear Lars Olofsson go deep into the scenes behind Juicyfields and much more!